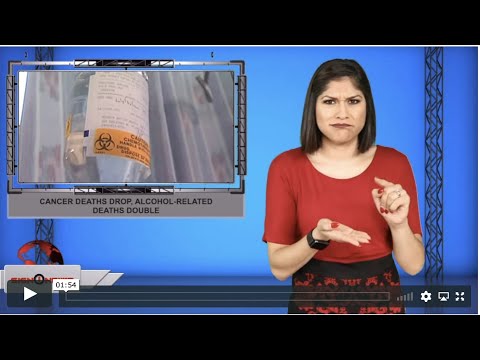 According to a new report from the American Cancer Society, there were nearly 3 million fewer cancer deaths from 2016 to 2017.

That’s 26 years in a row that cancer rates have dropped and the largest ever in a single year.

Researchers attribute the decline to a 2.2% drop in lung cancer, the leading cause of cancer deaths.

Experts say the decline is because people are smoking less and cancer treatments and detection have improved.

Unfortunately the number of Americans who died from alcohol-related deaths more than doubled between 1999 in 2017.

That’s according to a new study in the journal “Alcoholism, Clinical and Experimental Research.”

The research is based on a review of annual death certificates.

Causes of death include liver disease, overdose from alcohol or alcohol mixed with drugs.

Men died at a higher rate than women.

Non-Hispanic American Indians and Alaska natives are also among the groups with higher risks of alcohol-related deaths.

But researchers believe the actual number of deaths is an undercount because death certificates often fail to capture the role alcohol plays.

For example, only about one in six drunk driving deaths is actually reported as being alcohol-related.