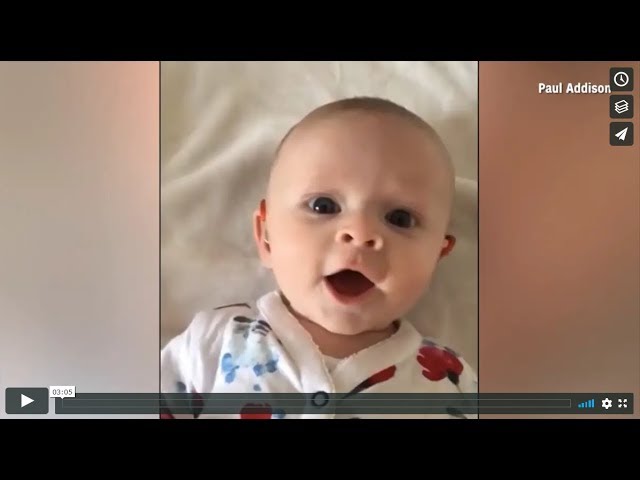 More than 700,000 people have watched a video of a baby girl in the UK and her joy when her hearing aids are turned on for the first time.

The father Paul Addison says he and his wife first learned about his daughter Georgina’s hearing difficulties during her newborn hearing test.

She was referred to an audiologist, diagnosed with severe deafness and the doctor suggested hearing aids.

The Addison’s took the doctor’s advice and four-month-old Georgina was outfitted with hearing aids from the UK’s National Health Service about five weeks ago.

Addison posted a video on Twitter because he wanted the world to know the joy his family experiences when their daughter’s new hearing aids are turned on in the morning.

Take a look at Georgina’s reaction.

Hearing people tend to get excited by stories like this.

But the response in the Deaf community is mostly “So what?”

What excites us most is language and communication.

Recently I returned from a family event.

Many of us know and have experienced this.

Everybody’s excited and talking across the room to different people and we try to catch what people are saying. We might catch one or two words, but that’s it.

But this time was the first time ever I requested an interpreter. Wow!

I didn’t realize I was missing so much. But this time, I caught everythng. I learned some things I never knew before because I could ask the interpreter what people were saying.

Also people in the Deaf community are sensitive about the wording when it comes to informing parents that their child “FAILED” the hearing test.

No one wants to hear that word.

A suggestion for wording may include “Your child’s hearing test shows signs of possible hearing inconsistencies or loss.”

Who wants to hear that their child failed one of the first tests in life?