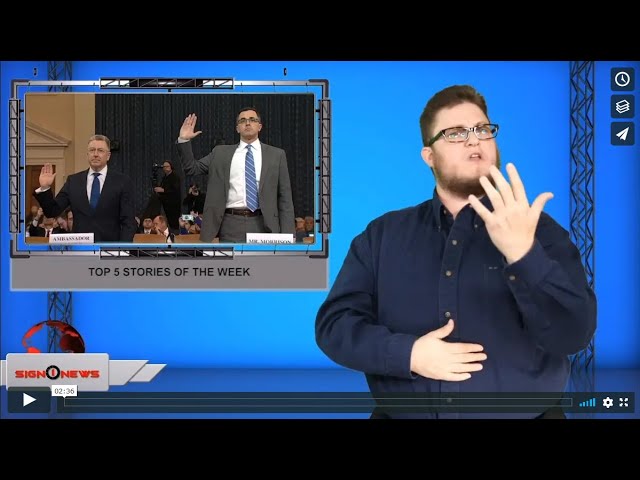 The public impeachment hearings dominated the headlines this week.

Eight current and former ambassadors and administration officials confirmed the storyline laid out in August by a whistleblower: President Trump tried to bypass Congress and use taxpayer money as leverage to get a foreign leader to hurt a political rival.

Trump vehemently denies the allegations and even offered to testify in his own behalf.

A sixteen-year-old white high school student was arrested in Gainesville, Georgia for allegedly planning a knife attack on a historically black church.

But when she arrived, no one was there.

The girl has been charged with criminal intent to commit murder.

An Australian grandmother is being called a hero for charging into a raging brushfire to save a koala trapped and surrounded by flames.

Vets say the koala’s hands and feet are completely burned and it has a 50-50 chance of survival.

A presidential debate was held in Georgia for the first time in twenty-seven years.

Sign1News was granted access behind the scenes at Tyler Perry Studios to show the debate coverage from a Deaf news perspective.

And the biggest Sign1News story of the week?

News anchor Candace Jones eating a Twinkie for the first time in her life!

The clip has been viewed at least 33,000 times with many of you sharing fond childhood memories of eating the cream-filled sponge cake.

Welcome to the Twinkie club Candace!